Ananya Panday commands a huge fan following on social media. The actress is often seen entertaining and interacting with her followers by sharing pictures and videos with them.

Although the young diva has successfully started her Bollywood journey and is already a few films down, her Instagram profile doesn’t say her profession is that of an actor. Instead, it is something that is sure to leave you in splits! 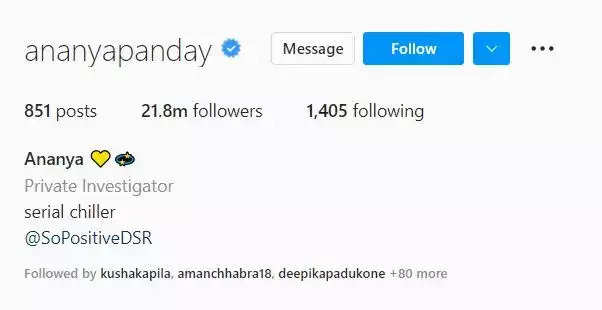 Ananya has a different profession listed in her public figure section of Instagram. According to her account, she is a Private Investigator. Her bio, however, serves the perfect explanation for her profession as it reads “serial chiller”. The actress has 21 million followers on Instagram.

Meanwhile, on the work front, Ananya was last seen in ‘Gehraiyaan’ co-starring Deepika Padukone and Siddhant Chaturvedi in lead roles. The film received mixed reviews from the audience and the critics alike.